My mom died a year ago today.  Needless to say, it’s been kind of a rough year.  Throughout my genealogy research, one thing I have learned is that obituaries used to be much more personal and interesting to read.  While attempting to put together my mom’s obituary a year ago, we made sure to get all the “important” stuff in there; but there were a lot of family names we had include, and not enough space to mention how unique of a person she really was.

So for my post I would like to write a much more personal obituary for my mom.

Linda Lee Kinsley Shaw Jennings Brown Kelley (as I used to call her when I was being a brat and she would refer to me as Erin Elizabeth) loved music.  She used to ride around in her car with CDs that were especially made by her children with all of her favorites, dancing the Linda dance.  This dance took on three different forms.  There was a fist shake.  There was the flat hand thrust.  Then there was the combo of the two.  She loved all kinds of music.  She even loved disco.  Every time some cheesy disco song would come on an oldies station she would remind us about how disco was a “real art form” and that she took disco lessons back in the 1970s, and so did A LOT of other people.  She loved Motown.  She obsessed over Michael Jackson’s live performances, especially when he was young.  She hated John Mellencamp because he was “too country” but loved Kenny Rogers.  She loved films, and therefore loved soundtracks.  A year later and I still can’t listen to You Can’t Always Get What You Want by the Rolling Stones without bursting into tears (as The Big Chill was her favorite movie). 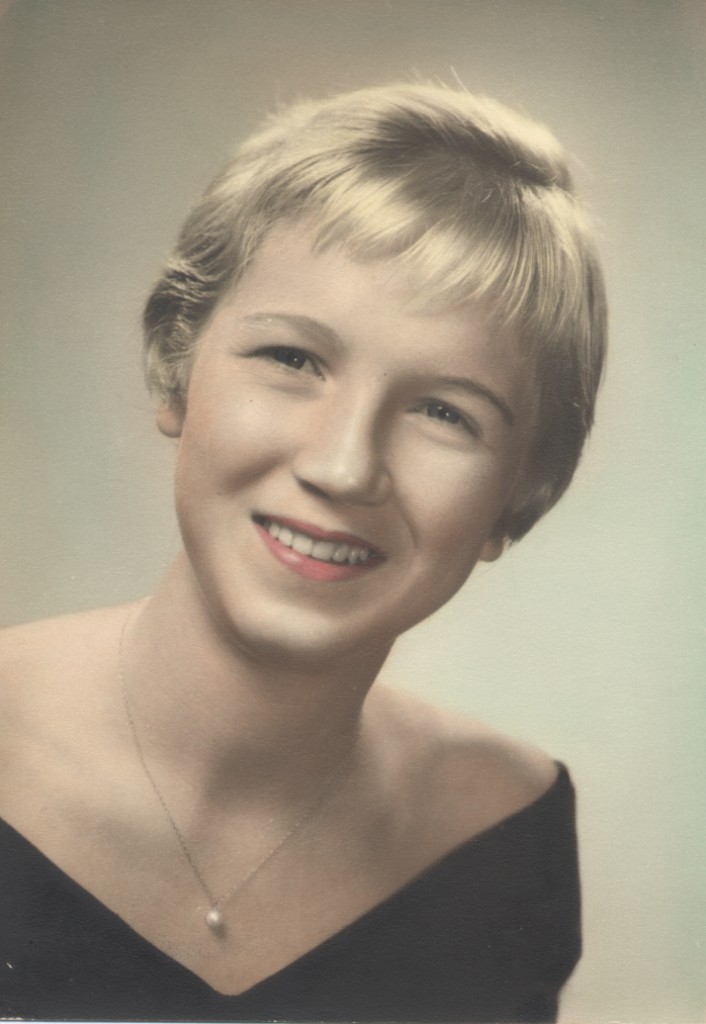 Linda Kelley in her senior portrait, abt. 1960.

Linda loved movies.  She claimed to dislike violent films that didn’t have any moral value, except she loved Die Hard (and many others that didn’t fit her description of moral).  She loved watching movies about the persecution and hardship of groups of peoples.  Anything civil rights or Holocaust-based was right up her alley.  In fact, when she was in the rehab hospital just a month before she died she told me all about how she had watched Fiddler on the Roof the night before and how she just cried and cried.  “Isn’t that the best movie?”

To my mom, everything was the best or the worst.  It was always, “Wasn’t that the BEST cheeseburger you’ve ever had?”   Yes, mother.  I remember all cheeseburgers in my history and that one was THE best.  “Isn’t this the worst winter EVER?”  Yes.  The worst.  Ever.

Linda had six children.  She was their biggest fan and most vocal advocate, especially to each other.  Within sibling relationships there will always be strife, but my mom was the peacemaker.  She tried to make us realize that we are all so completely different.  We shouldn’t try to change each other, but accept each other as they are.  One thing I heard from my mom often was, “You’ve got to get over it.  That is how _______ is. “  This was easier said than done, but I understand what she means.

She finally got to do what she really wanted to when she started her company, which eventually became Healthcare Professionals.  But she always worked, before and after Healthcare.  I mean…she took vacations and whatnot.  But I never remember my mother taking much of a break.  She never really retired.  When she “retired” she continued to work on her booth and work for Alliance Home Care.  When she got sick she was so upset that she wasn’t working, and couldn’t wait to get back to it.  She gave that work ethic to her kids.

She always thought I was better than I was and tried to be a cheerleader for everything I was interested in doing.  When I moved away from home she demanded a phone call every other day or so.  If I didn’t call her, she would call me.  If I didn’t return calls, I would get an earful and a guilt-trip.  This usually wasn’t so hard for me, considering during my entire childhood my first move when I got home from school was to call my mom.   It is still hard for me to pick up the phone after an interview or a really good movie and realize she isn’t the person to call anymore.

She loved to travel, but refused to leave the country (“There’s just so much to see here!  Why would I need to leave?”).  She loved having a place to get away.  They had what we called “the metal tent” at Lake Lemon for years.  Her other favorite places to visit were Las Vegas (because she loved the nickel slots), French Lick, Indiana (a place we went as a family for years), and pretty much anywhere else with Fred. 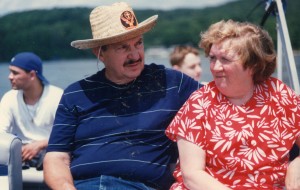 On a short weekend jaunt to Lake Lemon, (near Bloomington, IN) with the whole fam.

She loved her husband, Fred.  She took care of him and probably drove him insane.  I can still hear her in my head screaming, “Frederick!  Get In Here!”  She nagged him, but I am convinced that he liked it.

Linda was sick for years, but kept most of her health problems a secret from her children.  She had a heart attack at 57. She had diabetes for years before she told us she had it.  She had congestive heart failure for a long time before she told us she had it.  Her kidneys were failing when she attended my wedding and never mentioned anything about it.  While she cared for everyone else, she did not take care of herself.  I never saw her eat a fresh vegetable or a piece of fruit…in my entire life.  When she finally got outwardly sick, it was too late.

My mom was in the hospital for a few weeks, and then in PT rehab a few weeks.  Things were looking up when she was finally sent home to continue physical therapy from there.  She seemed upbeat and happy.  She had started dialysis, which she hated.  The last time I talked to her we were making plans for me to take her to dialysis and then hang out and have dinner at her place.  I never got to pick her up.  She went to the first treatment of dialysis that week and had a heart attack as she was waiting.  She never woke up again.  I am at least grateful that our last conversation was a good one, and she was in good spirits.  We didn’t bicker at all, which is mildly shocking.  But I didn’t get to tell her I really did enjoy her, or tell her I liked seeing movies with her (even really bad ones), or that I always liked her spaghetti the best.  Or goodbye.

My mother was not a saint.  There are things that she did in her life that I would not consider commendable.  She was stubborn as anyone I have ever met in my life.  Sometimes when I talked about my mom the word “infuriating” would slip out….regularly.  She was often close-minded about the weirdest things.  “I could never date a bald man.”  But she was nice.  She was SO nice.  Anyone who ever met her could never say otherwise.  These are the things she should be remembered for. 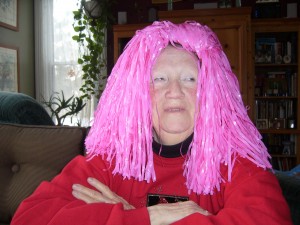 My mom, after letting her gradndaughter Remy work on her hair.

I really miss her, more than these (or any) words can say.

7 thoughts on “A new obituary for my Mom”