Unfortunately while I’ve been on break I have only had one day where I was able to make it to the Indiana State Library.  It was, however, a great visit.  I learned a lot of interesting info.  I was mostly looking for obituaries for Andrew’s family.  The goal is to get as many copied and recorded with the information transferred into my tree as possible.  It was amazing how helpful it was to fill some holes in my mom’s branch while out in Scranton.

Here was one of the most interesting stories I found.  I will just transcribe the entire news story from the Bourbon News Mirror in Marshall County on June 13, 1907:

“Last Thursday morning an operation was performed on Jacob Yazel, who lived near Inwood, for the purpose of locating the trouble he was having and seeking a remedy.  The operation was performed by Dr. McClure, of Inwood, and Dr. Shaffer, of Chicago, a son of Dr. Shaffer from Rochester.  When the surgeons had finished opening the abdomen of Mr. Yazel it was discovered that the outside of the liver was so hard that it was almost impossible to insert surgeons’ needles in it and when it was possible to do so the inside of the organ was spongy, thus indicating a condition that was incurable.  The wound was sewed up after the surgeons had made an exhaustive examination and though the patient rallied nicely it was seen he was not long for the world and on the following morning, about 6:30, he died.  The liver was so diseased that it was estimated to weigh almost 30 pounds.  The operation lasted 40 minutes.  Mr. Yazel had been ill for some weeks and all the physicians could do was to insist on the operation.  A few days before his death he sent for Attorney Thomas, of this place, and had his will made, leaving the farm and personal property to his wife.  He explained that he had made up his mind that he had to be operated on and took the will making as precaution, fearing he would not be able to survive it.  The deceased was about 65 years of age and was well knowsn and respected and leaves besides his wife a family of children, grown, who are all doing well.  The funeral was held Sunday. ”

A 30 pound liver?  My husband made the point that my dog is 30 pounds.  Now, this is a newspaper from 1907 and accuracy was never a strong point of sensational journalism.  But even a 20 pound liver would be amazingly impressive.

Anyway, it is sad that he died of liver failure at a young age, but this was an interesting bit of history that I enjoyed reading.

This is a photo that was THOUGHT to be Jacob Yazel.  If anyone out there sees this and knows otherwise, please respond.  I am guessing he is the one seated.  He would be around the right age. 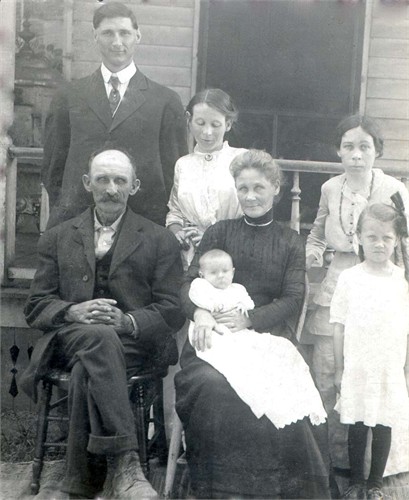