I found this when I visited the Indiana State Library.  I love 1.) that the writer is also the man who ministered the funeral service and 2.) how delightfully flowery the language is.

Father Caywood was born in the State of Maryland in the year 1790.  From there he removed to Kentucky, and thence to Indiana in 1833, where he resided until his death.  In early life he made an open profession of his faith in Christ the Savior, and United with the Baptist Church.  Previous to his leaving Kentucky he identified himself with the Christian church.  On locating in Hendricks County in 1837 he took membership with the church at Brownsburg, where it remained until his death.  In 1856 his beloved companion was taken from him by death, and the evening of his life was spent with his son in law, Mr. Ben McDonald, where he received every kindness and attention that love could bestow.  He was the father of 13 children, 8 having preceded him to the spirit world.  For several years, on account of bolidy infirmities, he had been prevented from meeting in the public worship, but his faith wavered not, though the “eye grew dim and the natural force abated.”  His last illness was brief.  Gently as the sun descends to his western home, he, on Nov. 3, 1884, closed his long period of service at the age of 94 years.  He came to “his grave in full age, like as a shock of corn cometh in, in his season.” Services were conducted by the writer at the church at Brownsburg, after which his remains were laid to rest beside his wife, while the rainbow of immortality arches their graves. 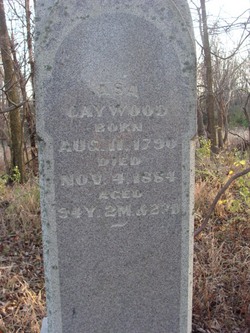 Asa Caywood is related to Andrew (the husband) in this way: