I just started a new job.  While I am excited to have a regularly paying gig, it really does cut into my exciting new life of genealogy-traveling.  What DOES excite me, is that I have a teacher’s schedule and I have a decent amount of time off which allows me to get around.

The week before I started this new job I wanted one last short little jaunt somewhere.  I decided to head to Crawfordsville, Indiana to see if I could find some answers on a Riley Bastion.  As many of these previous posts are, this one is about Andrew’s family.  Unfortunately most of the traveling for my family would be much farther.  Maybe this summer…

Riley Bastion is Andrew’s Great great grandfather.  His name was the first mystery.  I have seen a William Riley Bastion and a Riley Bastion in Crawfordsville.  This has to be the same person, right?  We can only assume.  The name is unique enough, and in such a small town during the same time period…we have to assume or we will go insane.  He is related like this:  Andrew Nelson>Kevin Nelson (father)>Paul Nelson (grandfather)> Annetta Bastion (great grandmother)> Riley (the mystery) Bastion

What made Riley such a mystery was that he died very young, leaving his poor wife Fannie a widow with three kids in her mid 20s.  Riley was just over 30.  I wanted to try and figure out what happened, where he was buried, and who his parents were.  I came home with some answers, but more questions.

I drove to Crawfordsville, a little town that is home to Wabash College.  I find that little college towns are kind of the best.  They have that small town charm but have a few really tasty places to eat.  I sought out the food before I headed to the library.  I almost drove off the road when I turned a corner and saw a sign for Arni’s!  YES!  ARNI’S! 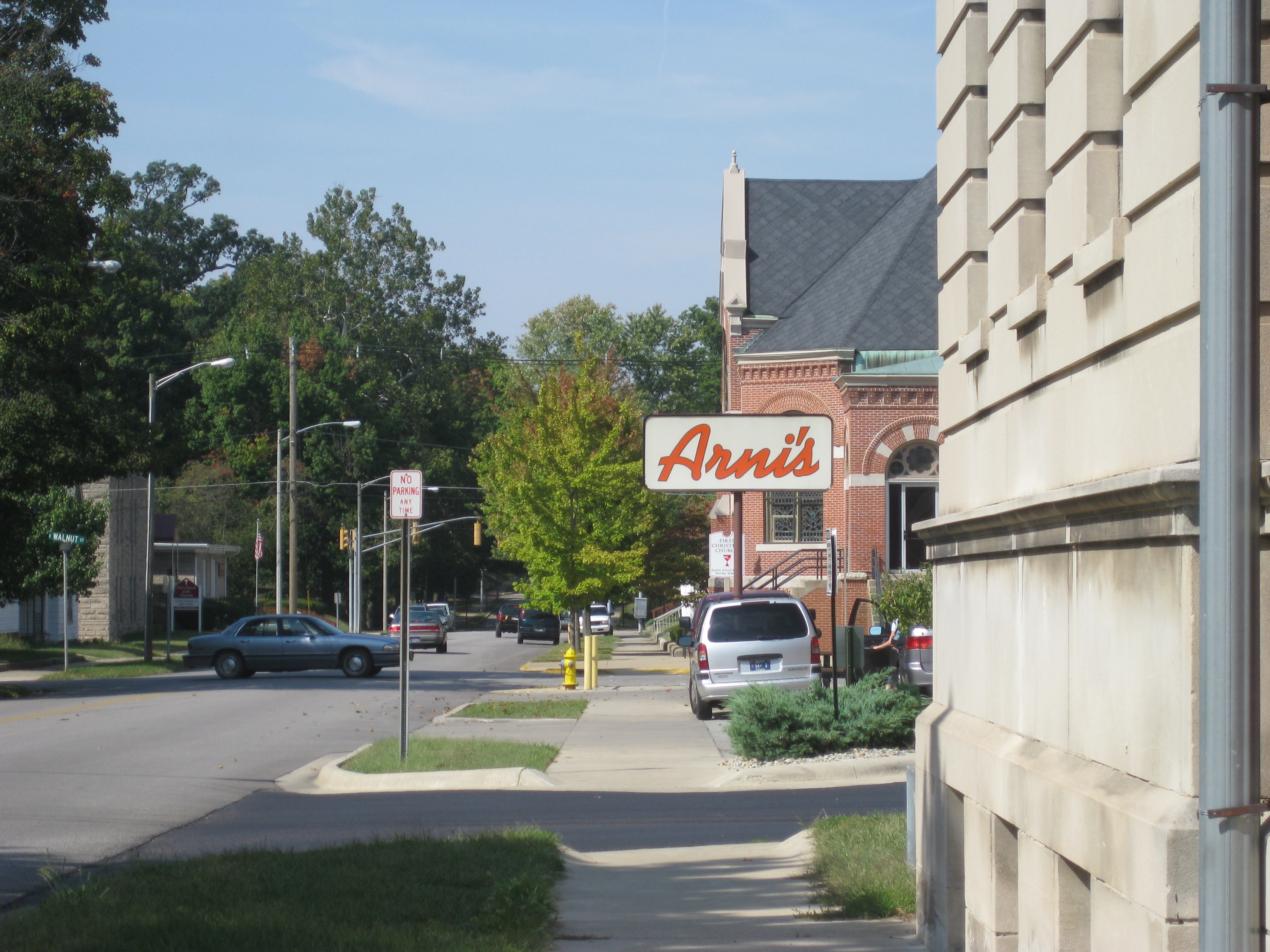 When I was growing up there was an Arni’s very near my house.  My sister, Kristen, worked there for years.  There were bikes all over the walls.  Celebrity cardboard cut-outs filled the foyer and bar.  The place was a heaven of tacky.  I loved it.  I still love it in my memories.  That Arni’s is now gone and they have moved even farther north and made it “nice”.  They have also changed the menu a bit which upsets me even more.  I went to this Arni’s once and that was the last time.  It was too depressing and nice.  This Arni’s looked just dingy enough for me to enjoy.  I walked in.  While there were no bikes or tacky decor, it was only counter service, the place was small and laid out weird, and it smelled like Arni’s.  Perfect.  I had a luscious hot ham and cheese and made my way over to the library, which was right next door.

I am one of those people who feels weird talking to people I don’t know.  When I actually do it, it’s not painful, but I just have to work up courage first.  Here are some things I hate:  calling to make reservations over the phone, asking for directions, getting my haircut because of the requirement for small-talk, and asking librarians for help when I’m not really sure what I’m looking for.  I am sure that librarians LOVE the challenge.  I would!  But not everyone is like me.  This makes me feel awkward and guilty simultaneously.

So I went to the family research section, which was fairly large.  I LITERALLY looked at every single book on the shelf and leafed through many more of them trying to find some information.  The only thing I could find about this Riley character was his death date, which I already knew.  So after about 2 hours of just browsing and hoping I went to talk to the librarian.  Why didn’t I do this in the first place?!  Within two minutes she used the death date to pull up a file on the computer which had a copy of his death certificate.  This included how he died (unreadable), how long he’d been sick, what his parents names were, and where he died.

Poor Riley had been sick for 2 years before he finally died.  His parents were listed as Phoebe and Anthony Bastion.  He died in Crawfordsville, which I had already suspected, but there was still no word on where he was buried.

I was so excited to get this information that I immediately went home to enter it into my computer to see what I could find in addition based on my new info.  And what I found was so frustrating.  Anthony and Phoebe may NOT have been his biological parents.  They may have adopted him and changed his name somewhere around his tenth birthday.  He may have been named William Riley Wheeler prior to that, but I can’t be sure.

This guy is going to require more than one trip to Crawfordsville.  At least I know there is an Arni’s there to keep me happy and full before I start a long day of mystery-solving.