During a visit to the Indiana State Library two weeks ago I came upon an amazing amount of information over both Andrew’s family as well as my friend Amy.  The first story I came upon was about Amy’s great great great grandfather, who it turns out died in a horrible grisly accident.  The local newspaper in Washington, Indiana (Daviess County) held back no specifics about the gory details…so obviously I have to post it:

Wrought By the Explosion of a Portable Engine Boiler

“Jack” Norris Torn to Pieces by a Flying Fragment of Iron.

A sickening mass of living, quivering flesh, mangled beyond recognition, and scarcely a resemblance to humanity.

Such was the sad end of poor Jack Norris.  One of the best known saw mill men and engineers in the county and a man that everybody in northeastern Daviess County knew and respected.

The accident that deprived him of life after fifty-two years residence in Daviess County, happened at twenty minutes after 9 o clock Thursday morning in Barr Township, ten miles northeast of this city.

Norris operated a portable saw mill, and had been running his mill on the farm of Clay Doane, just north of Henry Sefrit’s place, and near the Harrisonville road, since last spring.

The mill worked a force of four or five men when in operation, including Mr. Norris who was the engineer.  His sawyer was his son, John Norris, Jr. The boiler and engine of the mill were purchased about three years ago, and had been used almost constantly from that time.  The engine was about a 16-horse power.

Thursday morning the men went to work as usual, the force consisting of “Jack” Norris, his sons, John and Elbert, Lewis McAtee, and Thomas Murphy.

They were a little later starting than usual Thursday morning.

Clay Doane, owner of the farm where the mill stood, was hauling wood that morning, and he and his team stood on the bank of a little creek or “branch” that runs near the mill.  Shortly after nine o’clock Mr. Doane was startled by a terrific explosion, and for an instant the air about the mill was filled with the debris of the wrecked saw mill – boards, logs, splinters, pieces of iron, parts of the boiler, and coals of fire from the furnace.

The most horrible flying object, however, was the dismembered and mangled body of a man, which was shot through the air and surrounding tree-tops for a distance of more than 100 yards.

The body was that of Jack Norris.

He had evidently been standing at the side of the boiler when it let go, and a section, weighing a thousand pounds, had carried him in its flight through space, tearing his head from his body and reducing his form to shapeless and bleeding mass in the twinkling of an eye.

Hi body was split open, and from it, yet quivering with life, some of his internal organs were torn from their places and strewed along the terrible track of the heavy piece of boiler plate, which swept through the air with irresistible force, cutting limbs from trees 30 or 40 feet from the ground, and splattering their inanimate trunks with the brains and blood of the luckless engineer.

Having exhausted its force, the mass of iron fell in the road 100 yards from where it started, and a few feet further on lay the lifeless remains of Norris, who was mangled beyond recognition.

Bits of his flesh, hair, and beard were found sticking to the pieces of boiler.  Death, of course, was instantaneous, and he was killed as suddenly as if he had been prostrated by a bolt of lightning.

The other men who were working in the mill were all more or less injured.  John Norris Jr., the sawyer, had an arm broken, but was not rendered unconscious.

Elbert Norris, aged 18, Willis McAtee, aged 35, and Thomas Murphy were all prostrated by the force of the explosion, the breath knocked out of them, and each more or less seriously hurt.  Elbert Norris’ hurts were of the most serious character and may yet prove fatal.  He has a dangerous scalp wound, and was bruised about the body.

Clay Doane was the only man about the mill who was not injured.  He stood within 100 yards of the mill when the explosion occurred, and says the shock did not affect him, nor even frighten his team.  All the occupants of the houses in the neighborhood, however, felt the shock.

Mr. Doane was, of course, the first on the scene of the shocking accident, and he cared for the wounded as best he could till aid came.  The body of the dead man was put in as presentable shape as possible under the circumstances, and conveyed to the deceased’s home, near St. Mary’s.  The wounded men were also taken home, and their injuries attended to.

Based on plat maps and the description given in the article I believe I was able to work out where the accident took place.  Just north of the Amish school (north of Cannelsburg) on County Road 775 East, south of County Road 400 North. 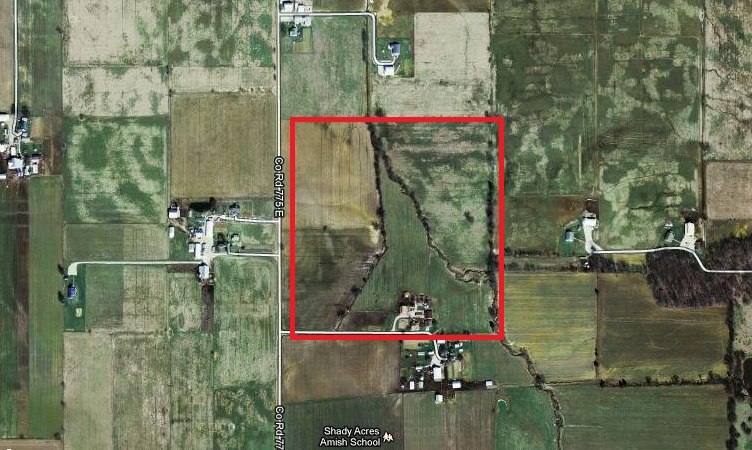