As I have mentioned before, my family is not from Indianapolis.  My dad’s side comes from Western Ohio for generations.  My mother’s side was from Pennsylvania and nearby New York towns for generations.  My Grandfather Kinsley changed that for all of us.  He moved the family from Scranton to Alabama (where my mother attended school) and then he settled in the Indianapolis area.  During his short time in the city he certainly made his mark.  I would almost consider him a pioneer.  He was a developer, and had huge impacts on trying to improve the downtown Indianapolis area.  He was even one of the founding board members of the Near Northside Community Development Corporation.  He was an important part of bringing businesses to the area that still remain in the city today. 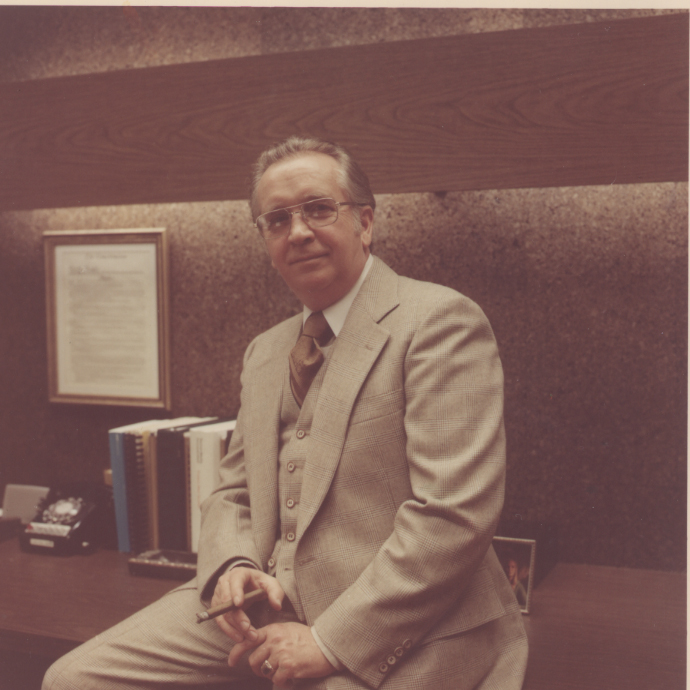 My grandfather, Charles W. Kinsley in his office....with a cigar....and why not?

Now, when I was growing up I didn’t know any of this about my grandfather.  All I knew was that he was kind of scary.  My memories of him include him refusing to read me Cathy from the comics because, “Women shouldn’t be writing the funnies”.  Even at age six I thought that was a weird thing to say.  I mean, I think Cathy is horrible too.  I just don’t think that’s the type of thing to say to a kid.  Anyway, I didn’t know much about him growing up except the stories I would hear from my mom, aunt, and uncle.  They were often kind of scathing.  But as I began to research the family in my own search I found out that my grandfather was kind of a pioneer for the city of Indianapolis….or rather current Indianapolis.

Now, as I have ALSO mentioned before, I am kind of jealous of Andrew’s family because they have been here for ages, so it’s much easier to research that branch.  But I hadn’t realized that they had been here for so long.  I had hit a brick wall for so long on his Nelson branch.  The farthest back that I could get was a James A. Nelson who was born in Kentucky in 1814 (who knows where…?) and died at some point before 1870, after living in Keithsburg, Illinois.  I also knew that James was married to a lady named Sarah Heaton.

So one day I was just messing about on the Internet trying to work my way through that wall.  I very rarely use Census information before 1850 because the information is so sparse it’s hard to match up with real people.  However, I typed in James A. Nelson in Kentucky, Indiana, and Illinois.  I found one living in Washington Township, Marion County (which was considered outside Indianapolis at that point).  Turns out this James Nelson lived next to a family of Heatons!  BINGO!  Based on this information I tracked the Heaton branch farther back.

The most interesting part was finding out that Andrew’s great great great great grandparents (Eli and Mary Heaton) are buried about a mile from where his parents live now.  No one in the family had any idea!  They are buried in Union Chapel Cemetery, and have been living in Indianapolis since the early 1800s; although, like I said, this was well-before this area was part of Indianapolis. 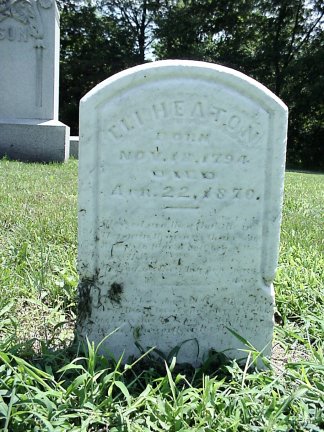 Eli Heaton's headstone in a cemetery just about a mile from Andrew's parents current home.

They are some serious ye olde Indianapolis pioneers.