I want to start this post by announcing that I am back in the saddle again, after that hiatus…with the kid and the hospital and the transition and all that jazz.  We are cool now.  Well, actually I’ve started waking up at 6am every day to get a little time to myself where I am not washing dishes or clothes, entertaining a baby with a very short attention span, or trying to get said baby to eat.  So now I have a little more time…as well as a little more exhaustion by the end of the day, but I’m pretty sure it’s worth it.

So…I made a discovery in the Munn family.  Well, I thought it was a discovery, because no one had ever thought to tell me about it.  Turns out it’s not a big secret, but a very interesting story!

So I started using this site called www.newspapers.com very recently.  I thought I would try it out for a year to see if it was of any use.  And OMG within seconds it paid for itself.  I found all kinds of stuff I had been searching for FOREVER.  Brick Walls broken down!  Hooray!  Anyway…I most recently found a crazy story about my great grandfather, John Darl Munn Sr.

John was born and raised in Darke County, Ohio, much like the rest of our crazy clan, and when he and his wife Eva had raised their kids and they all moved off they decided to move out to Arizona!  They lived in Tucson for quite awhile.  John had been a farmer on Ohio, but he was also a barber.  He obviously had quite the flair for hair, as you can tell in this amazing picture.

Check out the coiff on Mr. Munn! I wonder if he was a Dapper Dan man. My great-grandparents are holding my grandmother, Gene Odell (Munn) Brown in this pic.

John  was doing hair out in Tucson.  He eventually rose in the ranks of the Barbers’ Union.  Yes…there’s a union.  And he became the president!  Then he resigned and left the union completely.  Supposedly there was a disagreement over some rules that had been passed and John Munn was done with them.  And he felt like he didn’t need to abide by those rules since he was not a union member anymore.  Some of those rules involved not posting your prices.  There was also a set price that all barber’s would use ($1.00 at that time, which undercut other barbers).  They would also only be open on Tuesday-Saturday.  I’m not sure which rules he had the most issue with.

The reason this was all in the newspaper was because shortly after leaving his post after the disagreement, his shop was BOMBED!  Yes, you heard that right.  Bombed.  Now, the Union claims that it had nothing to do with it.  But seriously?  How crazy is that?  A barbers’ union.  I guess Arizona was still kind of wild west-ish back then (just before the Sunbelt explosion), but it sounds more like The Sopranos than anything else.

So I called my dad to tell him what I had found, thinking I was going to be giving him some new amazing information.  And he was all, “Oh yeah…I never told you about that?  They also tried to run your grandparents off the road once while they were driving.”  Yeah…no.  You never mentioned it.

Turns out the union also took him to court…sued him.  They were pretty mad, it seems.  I’m not really sure what came of the case, but if I find out I will update.

Here is the article and picture taken post bombing. 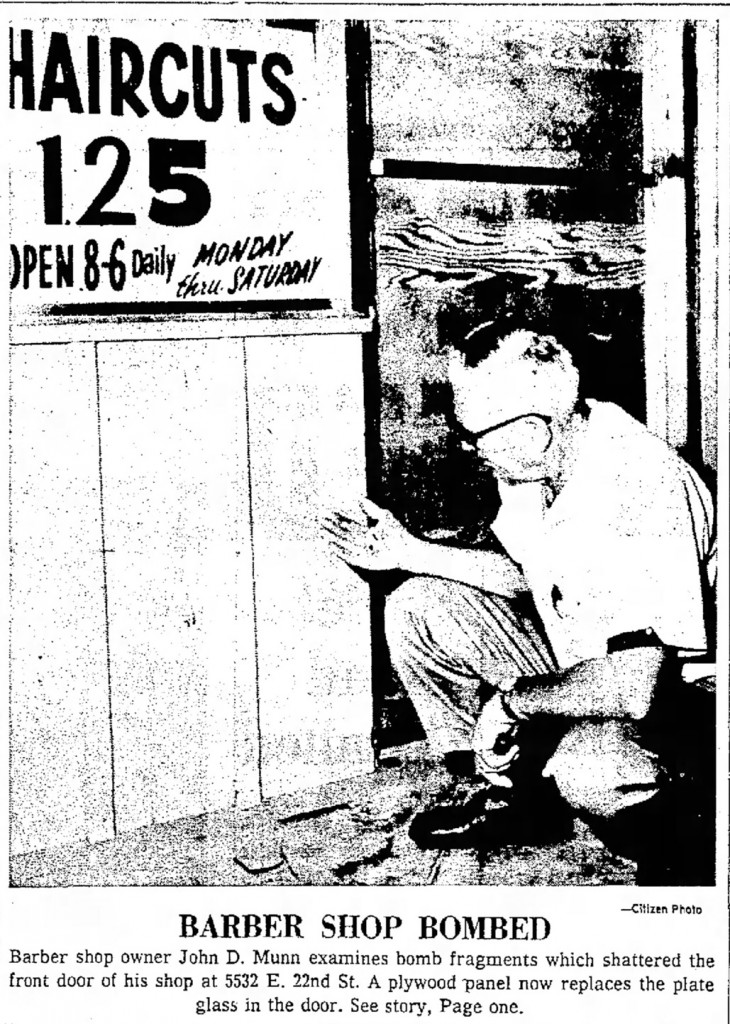 John Munn inspects his shop after it's been bombed!

Here is the link to the article in PDF, for those interested in reading about it.