We got into Scranton late.  I was tormented during the entire drive by deer threatening to run across the road.  I mean it.  The entire drive.  They were everywhere, standing three feet from the road, taunting me.  And then there were the dead ones…everywhere.  They were reminding me every five minutes that I had a new car that did not want deer guts all over it.  Nor did I want to be scarred for life over killing an animal – despite the fact they obviously deserved it.  So I was a little physically and mentally exhausted when we got to the hotel. We reserved a spot on Priceline.com just that morning at the Lackawanna Station Radisson, which is an amazing hotel, but was once an amazing train station.  Unfortunately I was so tired that I was barely able to keep my eyes open as we stumbled up to the room (which seemed nice, but honestly I can’t recall).  The next morning I got up early to get started on researching as early as possible.  We headed downstairs to have breakfast at the restaurant, which used to be the main waiting area/terminal of the train station.

This is the dining area at the Lackawanna Station Radisson.

Check out the tiles that lined the entire room. I have not looked into how old they are. I was wondering if they were original, and there when it was a train station, but we decided probably not. I should have asked.

Andrew and I packed up our things and prepared to break up for the day.  He would actually be working from a coffee shop right on the square downtown, and I would be heading to the Albright Memorial Library.  Andrew has the amazing advantage of being able to get a lot of work done away from the office.  So on this trip it wasn’t necessary to take full work days off and use PTO.  On a dreary and rainy morning I dropped him off at Northern Light Espresso Bar where he picked out his spot upstairs for the next couple of days.  I proceeded to search for a parking spot near the library.  This proved to be harder than I thought it would be.  Scranton is a small city!  This should be easy.  Yeah, not so much.  The meters there take tokens and quarters only.  That’s right – tokens.  You may be asking yourself, “Is Scranton like a massive Chuck E. Cheese?”  And no, it’s not.  It is just as hardscrabble as Joe Biden described it, especially in the rain.  There are no keyboard playing gorillas anywhere to be found.  But yes, they use tokens in the meters.  And there were not a ton of meters available near the library as the school and downtown areas are  well-populated places during the day. 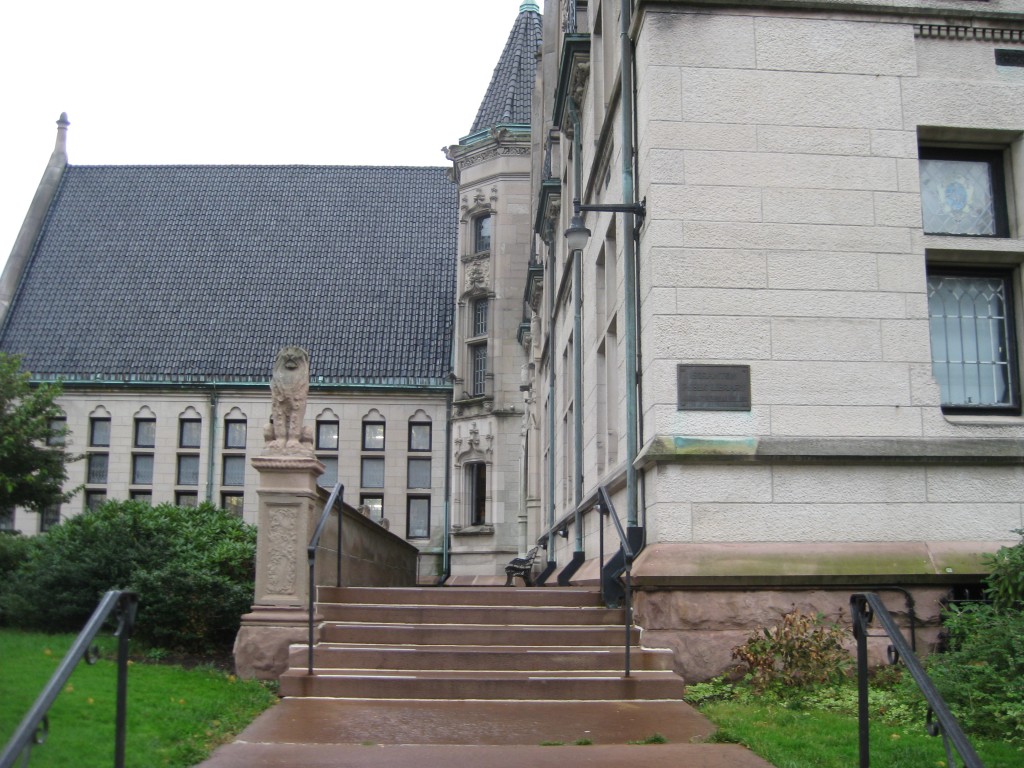 A rainy day outside Albright Memorial Library in Scranton, PA.

The library is an amazing old building and is well used.  The library was packed with people actually reading, checking out books, and researching.  They had the same “interesting” patrons that the Indianapolis libraries do (the oddballs in tin-foil lined hats that sit and read 12 newspapers over the course of 10 hours), but it was still a positive and productive atmosphere.  I headed upstairs to the research room and tried to figure out where to start first.

I decided on finding birth certificates or death certificates.  So I asked the lady at the desk where I might start.  She asked me for a specific date so I kind of scrambled and looked down my long list and found on that fit into the short parameters of what microfilm they had.  She then used that date to find a specific index list, which she searched.  She then used the number she found from that index to look for another number on another roll (which was kept in the back room where only staff could go) and then she pulled out a third roll which actually had the microfilm of the birth certificate.  I felt like a total dunce because I had no idea how she found it.  And it seemed to take forever.  So I got one good copy of a birth certificate of Louis Carlyle Smith. 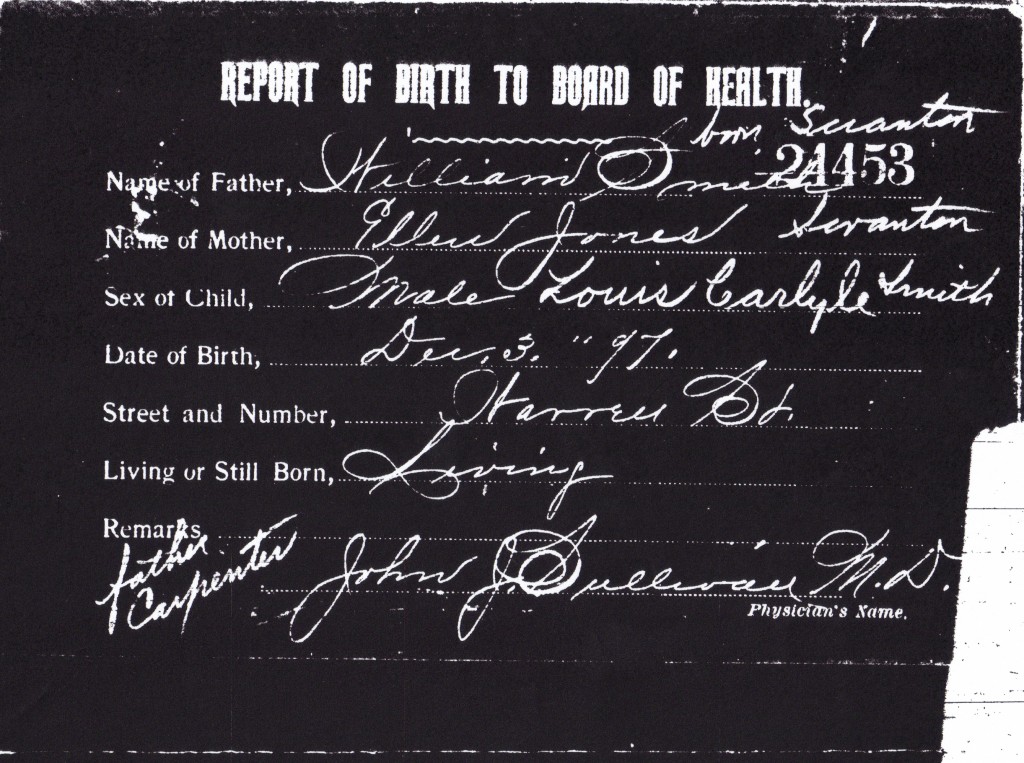 Birth Certificate from 1897 of my Great Grandfather. This is the only birth certificate I searched for after realizing I only had two days in the library, not two months.

I decided that searching for birth certificates was going to cause both myself and the staff of Albright major headaches, so I focused on something much easier to search – obituaries.  I found an amazing amount of information between the obituaries in their collection of newspapers and the Public Directories.  Between the two I was able to piece together a lot of missing information, including a few death dates (which I literally found by scrolling through months of obituaries).  I usually found out the churches that people were members of, which if I have more time in the area should help me find information as well.  I was able to find burial locations which helped me later in the week.  I also learned that my family’s roots in Eastern Pennsylvania, and especially Scranton, were very deep.

At one point during my search, a crazy lady walking around with a half gallon of milk brought the copy of my great grandfather’s birth certificate to me.  He’s been dead since 1960.  I wasn’t really concerned about people seeing his personal information.  She came up to me and lectured me on privacy issues.  I should not be leaving this personal information out.  I tried to explain to her that it really wasn’t private, and that’s it’s literally in the public records.  She was not the type of person to argue with – she was carrying a half gallon of milk around a library.  I thanked her for saving me from people trying to steal my great grandfather’s identity and moved on.

Things I learned in the library: