I know it’s wrong to play favorites with family members, which makes me feel like it’s wrong to play favorites with ancestors.  There are a few, however, that stand out to me for whatever reason.  Some of them may have great stories that I have been able to find.  Some of them may have left something great behind.  I have decided to start covering some of these favorites.   The unfortunate truth is that SO many of my ancestors probably had amazing lives and did amazing things, but there is absolutely no information about them out in the world anymore.  Or…at least I haven’t found it yet.  I will certainly keep looking.

An absolutely creepy picture of Truman Isaac Lacey from 1890. This is why you're not supposed to blink, Truman!

The reason that I know anything about this guy is not because he left our family all of his personal journals (he didn’t).  He did, however, leave behind some amazing work.  He left behind some amazing buildings.  Good old T.I. was an architect and started a firm that employed much of the Lacey family.  Many of his buildings, and those of his firm in general, are still standing today which is amazing!

He lived in the Binghamton, New York area for years, which is where the firm was located, so many of his buildings were located in or around the city.  Some of his biggest jobs include the following: 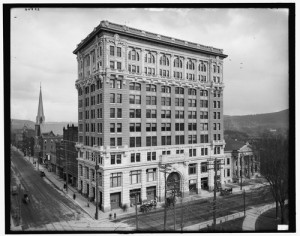 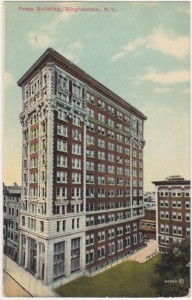 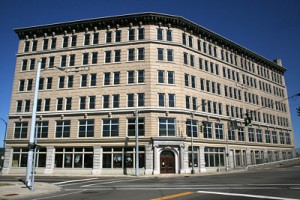 This all makes me feel like I’m going to have to create something very concrete (and awesome) to leave for future generations.  Thanks for setting the bar high, Truman.

Other facts about Truman:

So this is just one of many of my favorite ancestors.  Look out for another installment of “A Favorite Ancestor” sometime next month.  If you have one of your own, leave me a comment about them.