I was sick today.  I have actually been sick for days, but today is officially a sick day because I had to call into work.  I have it all: fever, chills, coughing fits, swimmy head.  I’m generally pretty useless.  One thing I used to really enjoy, and actually used to feel guilty about partaking in when I was jobless, was 2 full hours of West Wing on Bravo in the morning.  So I thought that I could guiltlessly watch West Wing while I moaned on the couch and used the dog as a pillow.  Guess what!  Bravo does not show West Wing for two hours every day anymore.  They show like 12 hours of Millionaire Matchmaker.  Now, don’t get me wrong, I kind of love that show and have nothing against it.  Millionaire Matchmaker, however, does not hold a candle to two hours daily of Josh Lyman and CJ Cregg.  I’m sorry if anyone disagrees.

So I watched the news for awhile, which was more depressing than usual, considering the horrible tornado in Joplin, which is being covered nonstop.  But then all of a sudden there was a switchover to our President, in Ireland.  They showed video of him having a grand old time in Moneygall with his distant relatives from Ireland.  Then I got to see him give his speech in Dublin.  He talked about how America is so infused with Irish roots.  It was mentioned on the news several times after that how everyone tries to claim they have Irish roots.

Now, my name is Erin.  This is another word for Ireland.  But as far as my parents were concerned, they had no idea whether or not we were Irish.  I guess they got lucky that I was a super pale strawberry blonde with blue eyes.

In honor of the U.S. desire to be Irish, I will honor my own Irish roots (that I have found so far).

Hugh Davidson and his wife, Elizabeth Allen, were from a tiny little town in Northern Ireland, in the County Antrim, called Randalstown.  They came over to the U.S. in 1812 just before the war started.  They brought two children with them.  Once they got into the U.S., they quickly moved inland towards Ohio and made a home in a few different counties before finally settling in Darke County, near Versailles. 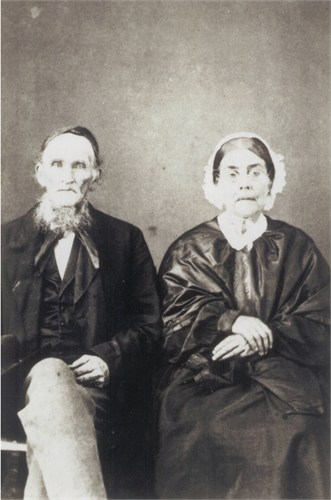 I don’t claim to know why they came here.  That’s one thing I’ll have to look into when I have time to focus on these folks. It may have something to do with the impending war with Britain.  I’m guessing there is some relation there.

This is one of the few ancestors I have found from Ireland.  What I find interesting is that none of these Irish ancestors come from the Republic of Ireland.  They are all from Northern Ireland, British territory.

Now back to moping, moaning, and coughing.