So I went to the library on Thursday for a short little stint after school and was possibly going to meet up with my friend Amy.  She was, however, waylaid by the Catholic cemeteries and couldn’t make it.  No fear, I had plenty of my own research to do.

One thing I was really hoping to accomplish was discovering the location where Andrew’s Heaton branch had property throughout Marion County, and how early did they get here.

Well, using the deed records I was able to find out a couple of locations.  Andrew’s gggg grandfather, Eli Heaton, had about 80 acres up in the Nora area (which is now a shopping center that runs right along the Monon Trail) that he bought for $300 in 1835.  I’m currently trying to somehow prove that we are entitled to that land now, and all the subsequent improvements to that land.

I also discovered that Andrew’s gggg-uncle purchased land on the south side of town, not far from where we live now.  Asa Heaton owned a chunk of land that now lies adjacent to the Eli Lilly Recreation Area off Raymond Street in Indianapolis.  He paid $100 for this in 1823.  I’m not quite as excited about this chunk of land as it is now being used for industrial uses.  Sneh.

I also decided it was finally time to stop by the old family cemetery (since we were driving by it anyway) and see where the Indy old-timers are resting.  It’s a lovely little cemetery really, just 1 mile north from where Andrew’s parents reside today. 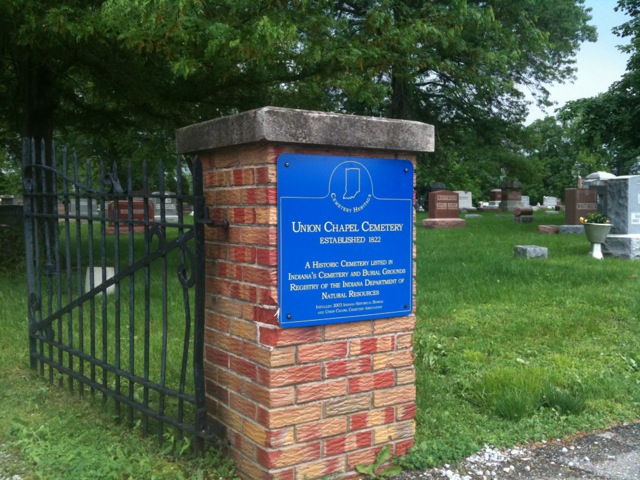 Entrance to Union Chapel Cemetery on the far north side of Indianapolis.

But isn’t it insane? They’ve been here since at least 1823!  Indiana wasn’t even a state till 1816.  Good job, Heatons.  Now, why aren’t there any streets named after you?