So, my buddy Jumwaltie and I had a few hours to kill on a Friday afternoon.  We had taken a trip last year out to Montgomery County (and learned that all dogs in Montgomery County do not love strangers and will chase your car) to visit some cemeteries to find some of our significant others’ family members.  We are still looking for how they may be related.  We don’t have a link QUITE yet, but we’ll get there.

We decided to take a trip back.  We started towards New Richmond, IN.  This is a surprisingly adorable little town that actually made me squeal at it’s preciousness.  On the way we stopped at a couple of smaller cemeteries.and just looked for surnames that looked familiar.  We also love finding bizzaro headstones.  We found a couple of interesting ones, some with weird names, and some of Revolutionary War vets (which is always interesting to find in Indiana).  Our first stop was Mt. Pleasant Cemetery, which actually seemed to be two cemeteries across the street from one another, one side decidedly older than the other side.  We stopped to have a look around and have lunch – picnic style! 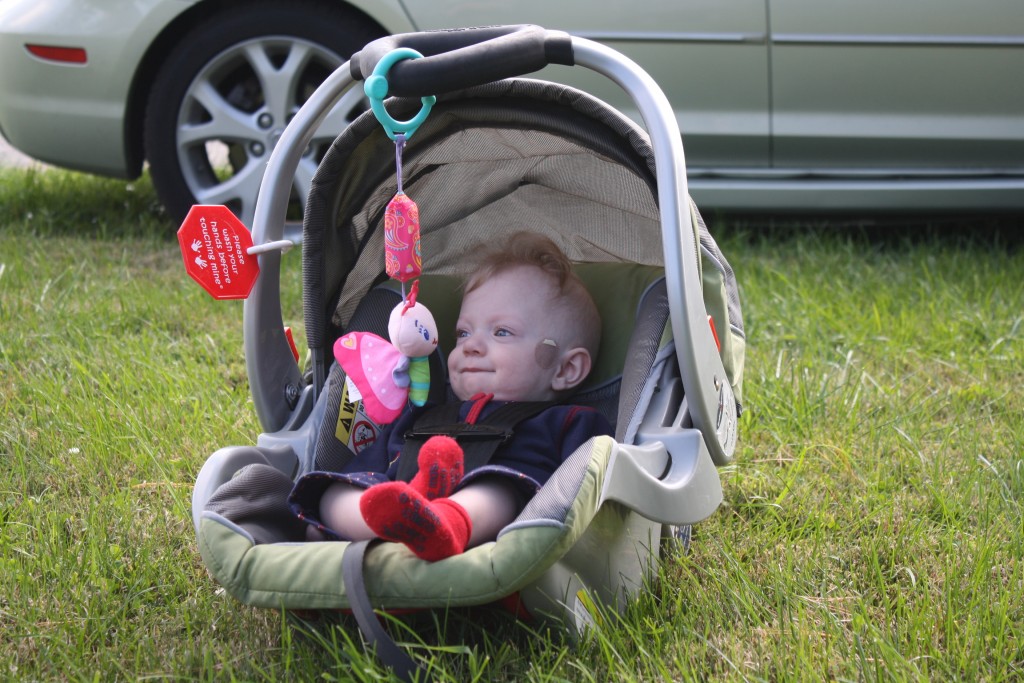 Coraline watching us in amusement while we ate sandwiches and apples. What a lovely little picnic. 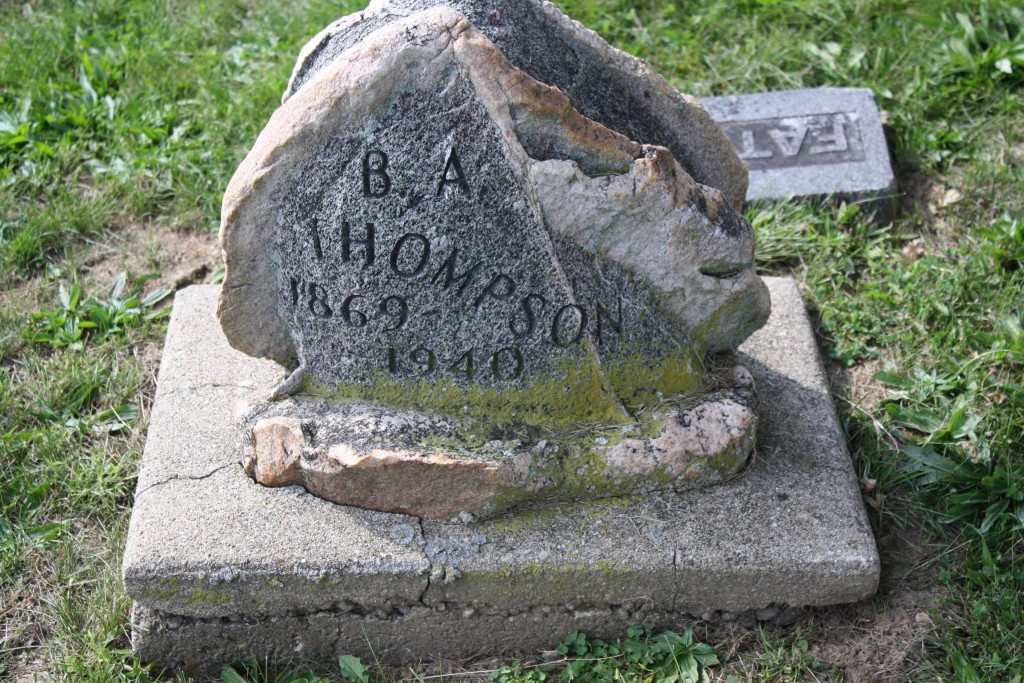 Very strange headstone for B.A. Thompson. Was this look the goal? 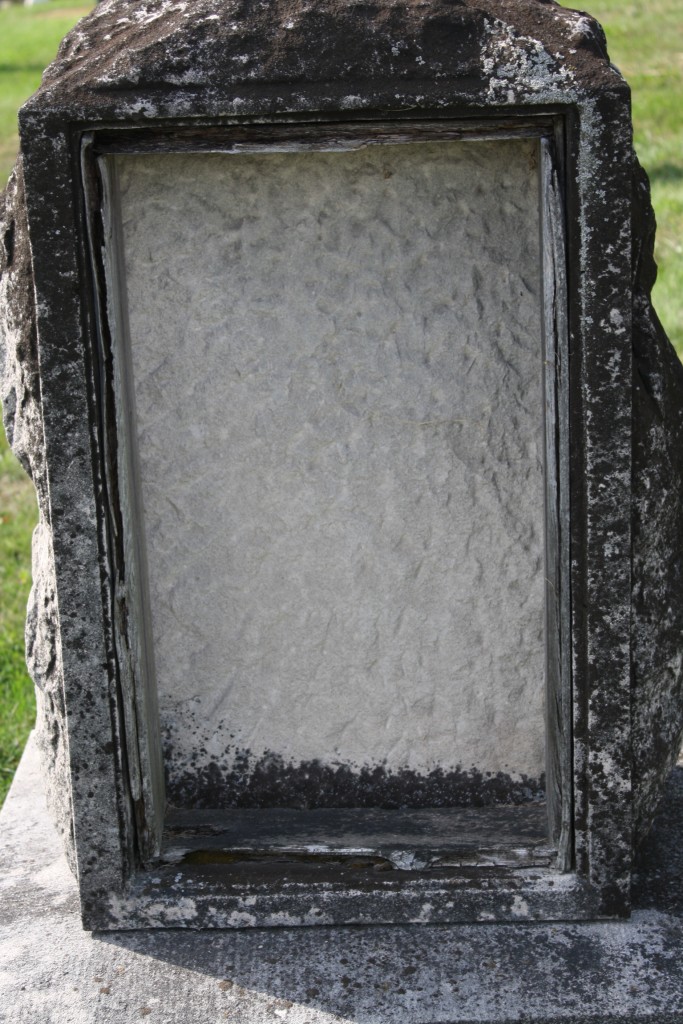 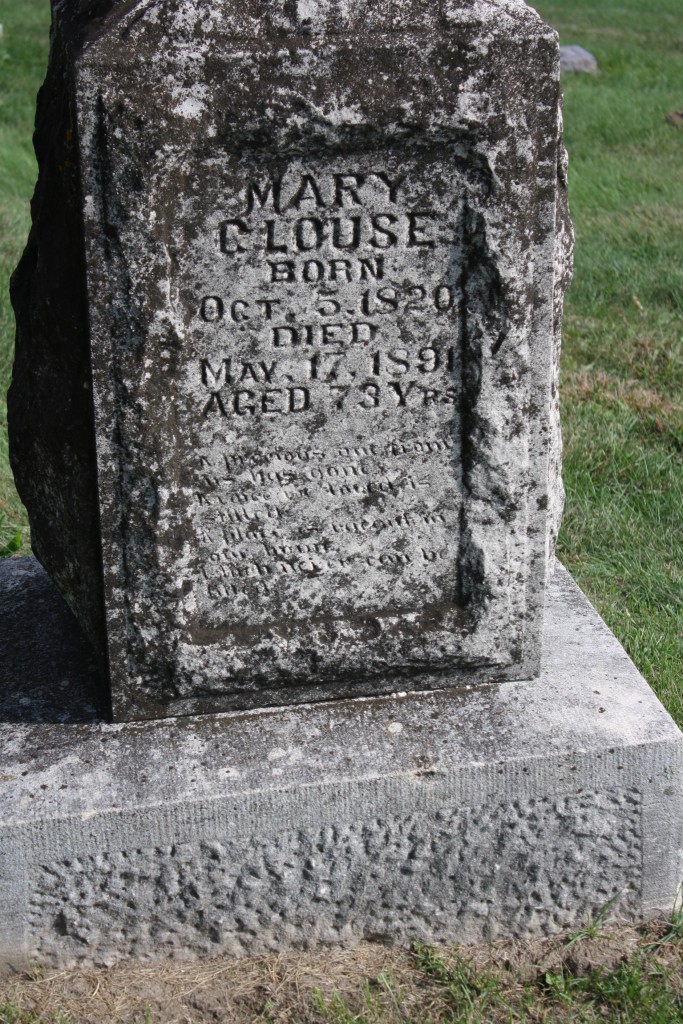 I’m not sure which is the front and which is the back. But on one side we find the inscription. on the other side is a box to put in decoration? Or memorials? Or…what? 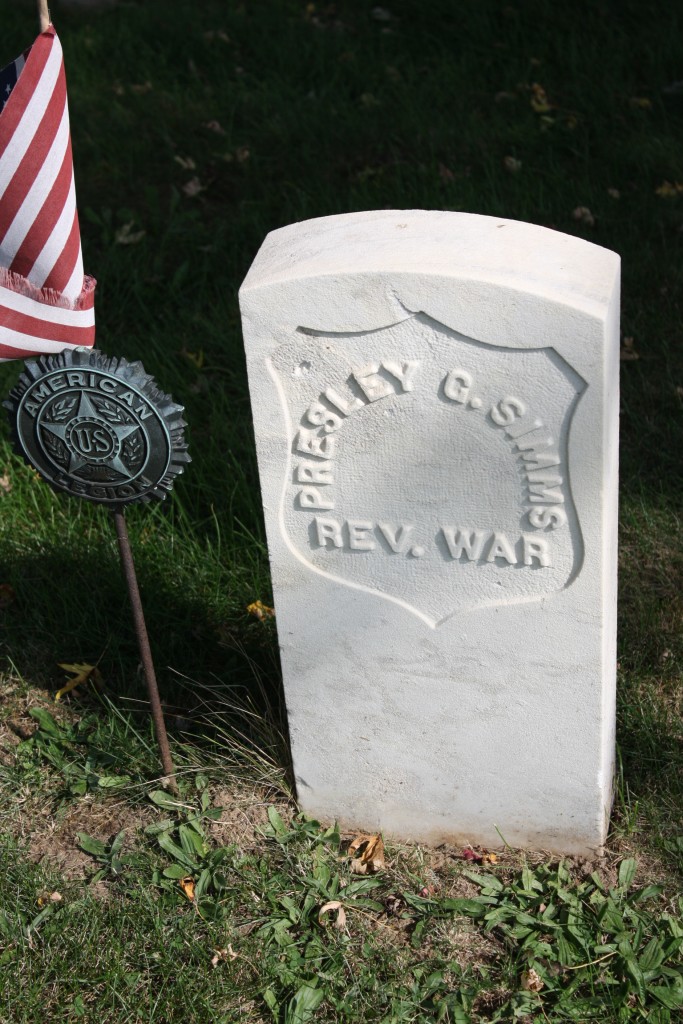 Then we headed to New Richmond Cemetery, which is seriously NOT ON GOOGLE MAPS?!?!  It really wasn’t.  There were cemeteries with like…12 people in the whole thing on google maps.  New Richmond with a TON, nope.  Not there.  I was looking for Bastions.  One of Andrew’s ggg gradfathers was Riley Bastion and his history is eluding me.  He died young (his early 30s) so his paper trail is short.  I found a few of them…took some pics, and we were on our way to…

Oak Hill Cemetery in Crawfordsville.  This is a beautiful and calming cemetery that is kept up very well.  The baby was not all that excited about being cooped up in the car, so we got out to walk around and came upon a very strange “headstone” for a man named Nathaniel Parker Willis.  It was huge with a metal plaque, with like…a ton of writing and a relief picture of who we assumed was him with his daughter (who is mentioned on the plaque).  Here it is, to read for yourself: 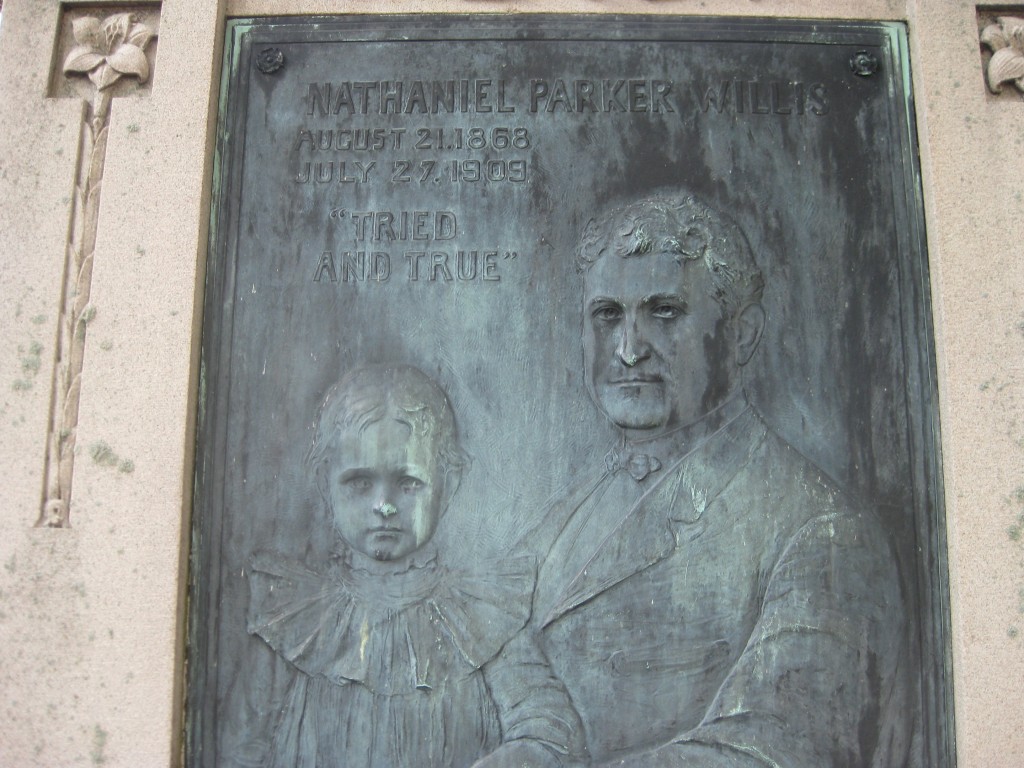 Relief picture of Nathaniel Parker Willis and his daughter, Mary Frances Laura Willis. I wonder what happened to Mary. 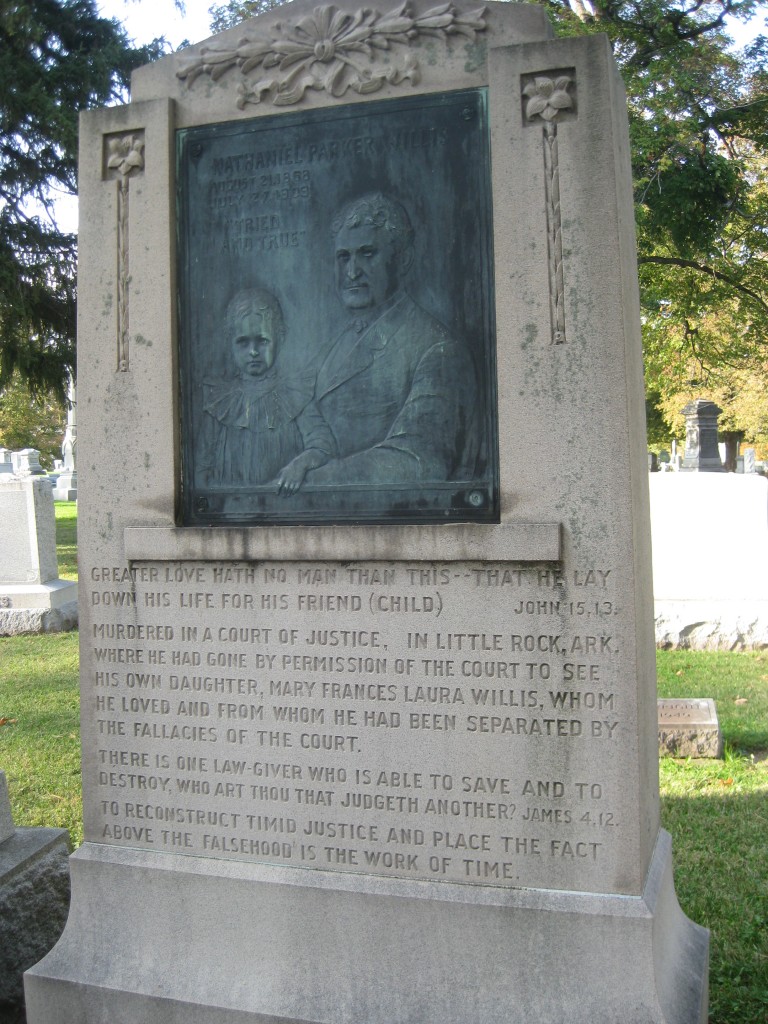 So I thought, was he ACTUALLY murdered?  Or is this metaphorical?  How was he killed in a court of justice?  Huh?  So Jumwaltie and I decided that we would look this up when we got home cause it was just too weird.  Soooo….we did.

Nathaniel Parker Willis WAS killed in a court of law.  He was actually shot in the heart by his ex-wife’s new husband because Mr. Willis had just won custody of his daughter after a 7-year custody battle that seemingly played itself out in the press.  I found articles about it starting in 1902 until he was shot in 1909 (and actually beyond that, as they mentioned the trial for the shooter).  Here is what we gathered from the articles…

Nathaniel and his wife, Hattie, were not married in 1899/1900 and lived in Indianapolis with Nathaniel’s mother, Frances.  They had little Mary Frances Laura Willis and within 18 mos they were filing for divorce.  The mother claimed that Frances was a crazy lady with a horrible temper who she didn’t want her daughter living with.  She also said that Nathaniel was cruel to her which was why she wanted the divorce.  The wife left town with the child, claiming that at one point Nathaniel had done the same and tricked Hattie into kidnapping her.  It sounds like she left with Mary and Nathaniel wasn’t sure where…and he spent years trying ti find her and finally did in Arkansas.  He won the custody case that then took place in Arkansas.  When they were meeting up to discuss transfer of child, Hattie’s new husband, W.Y. Ellis, came to the meeting and pulled a gun, nearly missing a Senator when he shot, and got Nathaniel in the heart.  Wow!  What a sad and amazing story.

It actually reminded me a little of the book Indiana Gothic, by Pope Brock.  This was a great book that Brock wrote after he started researching his family history and learned of this terrible scandal, tragedy, and court case in his family’s past.  I thought what an amazing story this could be if written into a novel.  Someone get started on this, pronto!

Sadly we were unable to find any Bastions here, and the cemetery office was closed (we were obviously very prepared and organized on this trip) and headed home.

Then I went to dinner.  Then my car was broken into.  That’s a story for another place.  Wah Wah…..